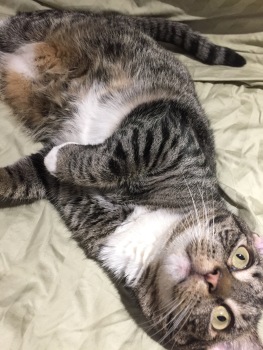 The Hooman has at last left Inside, wearing her bouncy big-shoes (the ones where you have to watch your tail), so Bird and me are going to try to write our first diry entry. Or at least Bird tells me she is going to be the writer, like Hooman, and I am going to bong and bing the letters out as best I can. I asked why it had to be she who was writer and me and my nose who had to bong and bing, and Bird said it is because she is older and bigger than me, and everyone knows black cats are the smartest. From each according to their ability, says Bird, that is what Soshlists believe; and I am but little sister whose tail is on the wrong way round. Also without Plittikal Wareness.

The reason for the diry is that we think Something Odd is going on out there, and Bird says it is important we record it for Cats of Posterity.  And we think this because Hooman is most unexpeck most unecks is always here. There is no more going off after our breakfast to the Libree, there is no coming home with treats, she is just always here, here, here. Oh says Bird, for the days when she was left in peace with great thoughts and I was left in peace with Mousie and Toy Box. Hooman is now not only always here but seems to be unable to walk past either of us without picking us up for cuddle. What happened to Kitty Quiet Time, Hooman? I don’t think I got more than four uninterrupted naps this morning!

Also, Hooman has been doing squeaky thing, and when she picked me up yesterday in middle of squeaky thing, she was being leaky too – eeugh! Aaargh! Apparently the thing that had upset her and made her squeaky was news that Monster is Stuck In MERICA For MONTHS. We are quite fond of Monster, Bird and me, as he means Double Laps, and Four-Handed Stroking, mmmmmm, but he also means we all have to share Bed. We are happy to share Bed with Hooman, but Monster takes up too much room and means Bird and I end up on Sofa. So him being Stuck In MERICA For MONTHS seems like Not Bad Thing to us, especially as CatGod knows, it looks like there will be plenty of naps we have to catch up on. I appreciate that Monster matters to Hooman at least almost half as much as we do, but was it really necessary to kiss me so hard my top whiskers not only got wet, but bent as well?

So far as we can tell, all this is due to fact that Outside there is now thing called Bloody Carniverus. What Bloody Carniverus might be we have no idea (sort of Dog, maybe?), but Bird says she thinks he/it/they is reason why no Monster, and also why no Kitty Quiet Time, so is clearly Very Bad Thing. So it is a bit worrying when Hooman is out there in same place as it, even if she does have bouncy big-shoes on, to run away. Without her, who will serve up Crunchies, and whose head will I sleep on? Also Hooman is a bit off her cushion today, like me when I have had too much Nip, as she gave us extra treats before she went out without remembering we’d had them already. To each according to her needs said Bird, but my need is for Hooman to do chin rubs and find Mousie when Mousie has got stuck under Chair and what if Hooman gets lost too, because out there is HUGE. And now I need to pee.

Oh meow! Hooman has returned! She came running into bathroom while I was still in litter-box to wash hand-things. Excuse me, Hooman! ‘It’s like Twenty-Eights Days Later out there,’ she said, (which is? What cat can tell?) as I did my best to ignore her and finish pee with dignity. ‘Only without the zombies. Everyone’s in masks like Hannibal Lecter.’ (Again, we have no idea.) She had brought big bottle back with her, which went into fridge. ‘There may be no loo-roll,’ she declared, seizing Bird and bending Bird’s top whiskers for a change, ‘there may be no pasta, but as long as we have pinot grigio, we’ll survive, little ladies won’t we? Now, who hasn’t had any treats yet this morning?’

ME! we both said, at once. I’m telling you, completely off her cushion. Eeeps!

One thought on “DAISY’S DIRY”

This site uses Akismet to reduce spam. Learn how your comment data is processed.